"Work is not man's punishment.
It is his reward and his strength and his pleasure."
George Sand (1804-1876), French novelist
The words 'thank you' are just as important in business and professional contexts as they are in your personal life  in fact, some top business men and women claim that their success is based on always showing appreciation to those who have helped them professionally!
Here is a selection of gratitude quotes for thanking your employer, boss, manager, colleagues, coworkers, staff & employees, or indeed anyone and everyone who has helped you at your workplace, in your business or in corporate life - be it for a bonus, a promotion, or on any other occasion.

For more great quotes that are useful for thanking and showing appreciation to people in a business, corporate and professional context, see also: Thank You Quotes & Sayings for Help, Assistance & Great Service.

To make it easier for you to find a suitable quote I have split the page up into sections:


Thank You Quotes for your boss, manager, employer or mentor: showing gratitude for opportunities, encouragement & support


The best executive is one who has sense enough to pick good people to do what he wants done, and self-restraint enough to keep from meddling with them while they do it.
Theodore Roosevelt (1858-1919), 26th President of the United States (from 1901 to 1909)


I feel that the greatest reward for doing is the opportunity to do more.
Jonas Salk (1914-1995), American medical researcher who discovered the polio vaccine

Thank You Quotes for colleagues, coworkers & partners: thanks & appreciation for teamwork & cooperation

Alone we can do so little; together we can do so much.
Helen Keller (1880-1968), American deafblind author, activist & lecturer


It's not where you are in life, it's who you have by your side that matters.
Author unknown


Light is the task when many share the toil.
Homer (~8th century BC), Greek poet


Probably no greater honor can come to any man than the respect of his colleagues.
Cary Grant (1904-1986), English-American film actor


An agreeable companion on a journey is as good as a carriage.
Publilius Syrus (1st century BC), Roman writer of maxims

Thank You Quotes for employees: praising their skills, character & approach to work

We often take for granted the very things that most deserve our gratitude.
Cynthia Ozick (b. 1928), American writer


Quality means doing it right when no one is looking.
Henry Ford (1863-1947), American founder of the Ford Motor Company


Apply the habit of going the extra mile by rendering more service and better service than you are now being paid for.
Napoleon Hill (1883-1979), American motivational author


Every job is a self-portrait of the person who does it. Autograph your work with excellence.
Author unknown 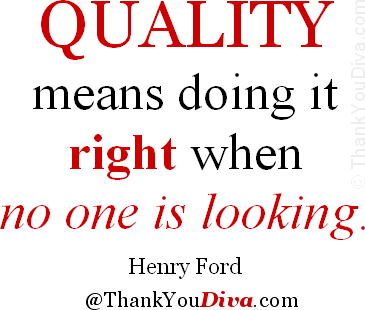 The rewards go to the risk-takers, those who are willing to put their egos on the line and reach out to other people and to a richer, fuller life for themselves.
Susan RoAne, American networking expert, motivational speaker & author


Getting money is not all a man's business: to cultivate kindness is a valuable part of the business of life.
Samuel Johnson (1709-1784), English author & creator of A Dictionary of the English Language

The only people with whom you should try to get even are those who have helped you.
Attributed to John E. Southard


Praise the bridge that carried you over.
George Colman "the Younger" (1762-1836), English dramatist & writer


Gratitude is one of the least articulate of the emotions, especially when it is deep.
Felix Frankfurter (1882-1965), American Supreme Court Justice 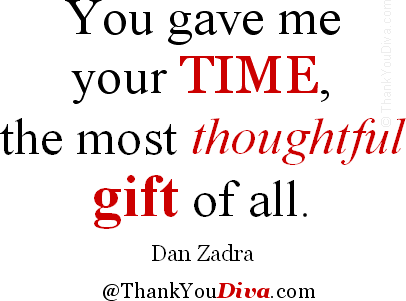 There is no greater loan than a sympathetic ear.
Frank Tyger (1929-2011), American cartoonist & writer


You gave me your time, the most thoughtful gift of all.
Dan Zadra, American communications consultant, publisher & motivational author. From: Gratitude


A helping word to one in trouble is often like a switch on a railroad track,  but one inch between wreck and smooth-rolling prosperity.
Henry Ward Beecher (1813-1887), American priest & social reformer


It's nice to be important, but it's more important to be nice.
Traditional saying


The excellence of a gift lies in its appropriateness rather than in its value.
Charles Dudley Warner (1829-1900), American author & journalist


To give without any reward, or any notice, has a special quality of its own.
Anne Morrow Lindbergh (1906-2001), American author & aviator


It's easy to make a buck. It's a lot tougher to make a difference.
Tom Brokaw (b. 1940), American TV journalist & author


I feel a very unusual sensation  if it is not indigestion, I think it must be gratitude.
Benjamin Disraeli (1804-1881), British Prime Minister & novelist 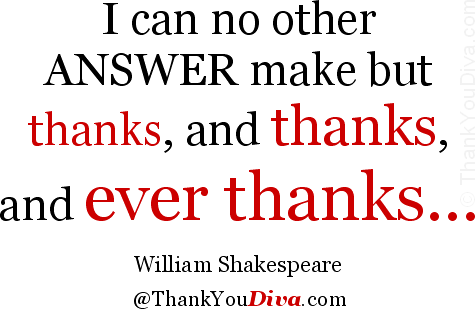 Thank You Quotes for the business payments of bills, invoices & debts


Thank You Quotes for business success: praise and appreciation for staff, employees & colleagues for a job well done


Every problem has a gift for you in its hands.
Richard Bach (b. 1936), American writer


Thank You Quotes for trying & making an effort... and encouragement after failure

If you're not failing every now and again, it's a sign you're not doing anything very innovative.
Woody Allen (b. 1935), American actor, director, comedian & author


He only is exempt from failures who makes no efforts.
Richard Whately (1787-1863), English theologian & Archbishop of Dublin


A first failure is often a blessing.
Attributed to A.L. Brown 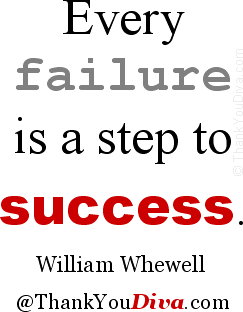 
Our greatest glory is not in never falling, but in rising every time we fall.
Confucius (551-479 BC), Chinese philosopher, politician & teacher


Failure is the condiment that gives success its flavor.
Truman Capote (1924-1984), American author