Thank You Quotes for Dad
Saying thanks to Fathers to Father's Day... or any day!

"A father is someone who carries pictures in his wallet where his money used to be."
Author unknown
Dad can be so important to our lives, but how often do we take the time to tell him just how much he means to us?
Sponsored links
A special thank you quote  heartfelt, funny or cute  can help you to express your love, appreciation and gratitude for who your Dad is, and everything he does and has done for you over the years.

Here is a selection of favorite and inspiring thank you and gratitude quotes for Dad. Use these great quotes on thank you cards and notes, and on special gifts, presents and keepsakes  not just on Father's Day, but also on Dad's birthday, and any day you want to say 'thank you, Daddy, for everything!'.

Thank You Quotes for Dad/Father

The greatest gift I ever had
Came from God; I call him Dad!
Author unknown


Any man can be a father, but it takes someone special to be a dad.
Traditional saying


It is not flesh and blood but the heart which makes us fathers and sons.
Friedrich Schiller (1759-1805), German poet, historian & philosopher


Dad, you're someone to look up to no matter how tall I've grown.
Author unknown


The child of a tiger is a tiger.
Haitian proverb 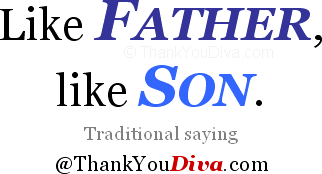 I cannot think of any need in childhood as strong as the need for a father's protection.
Sigmund Freud (1856-1939), Austrian neurologist, psychologist and founder of the discipline of psychoanalysis


He that honoureth his father shall have a long life.
The Bible, Ecclesiasticus 3:6


The greatest gift is a portion of yourself.
Ralph Waldo Emerson (1803-1882), American philosophical writer & poet


To you your father should be as a god; / One that composed your beauties, yea, and one / To whom you are but as a form in wax, / By him imprinted, and within his power / To leave the figure or disfigure it.
William Shakespeare (~1564-1616), English playwright & poet. From: A Midsummer Night's Dream, Act I, Scene 1


Gratitude is one of the least articulate of the emotions, especially when it is deep.
Felix Frankfurter (1882-1965), American Supreme Court Justice 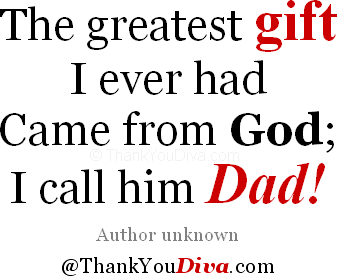 I would thank you from the bottom of my heart, but for you my heart has no bottom.
Author unknown


My father gave me the greatest gift anyone could give another person, he believed in me.
Jim Valvano (1946-1993), American college basketball coach


My father used to play with my brother and me in the yard. Mother would come out and say, "You're tearing up the grass." "We're not raising grass," Dad would reply. "We're raising boys."
Harmon Killebrew (1936-2011), American baseball player 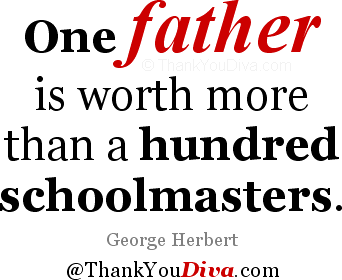 I've had a hard life, but my hardships are nothing against the hardships that my father went through in order to get me to where I started.
Attributed to Bartrand Hubbard in Dad's Wit: Quips & Quotes for Fantastic Fathers


It is a wise child that knows his own father.
Homer (~8th century BC), Greek poet


The most important thing a father can do for his children is to love their mother.
Henry Ward Beecher (1813-1887), American priest & social reformer


Thy wife shall be as a fruitful vine
by the sides of thine house.
Thy children like olive plants
round about thy table.
The Bible, Psalm 128


A wise son brings joy to his father.
The Bible, Proverbs 10:1


One father is worth more than a hundred schoolmasters.
George Herbert (1593-1633), Welsh priest & poet


By the time a man realizes that maybe his father was right, he usually has a son who thinks he's wrong.
Attributed to Charles Wadsworth (b. 1929), American classical pianist


When I was a boy of fourteen, my father was so ignorant I could hardly stand to have the old man around. But when I got to be twenty-one, I was astonished at how much he had learned in seven years.
Widely, but probably incorrectly, attributed to Mark Twain


Henry James once defined life as that predicament which precedes death, and certainly nobody owes you a debt of honor or gratitude for getting him into that predicament. But a child does owe his father a debt, if Dad, having gotten him into this peck of trouble, takes off his coat and buckles down to the job of showing his son how best to crash through it.
Clarence Budington Kelland (1881-1964), American writer


Fatherhood is pretending the present you love most is soap-on-a-rope.
Bill Cosby (b. 1937), American actor, comedian & educator


A father is a banker provided by nature.
French Proverb