Thanksgiving Quotes: saying thank you on the holiday that celebrates gratitude!

"Now I, your magistrate, do proclaim that all ye Pilgrims, with your wives and ye little ones, do gather at ye meeting house..., there to listen to ye pastor and render thanksgiving to ye Almighty God for all His blessings."
William Bradford (1590-1657), English leader of settlers at Plymouth Colony, Massachusetts. Excerpt from the first Thanksgiving Day Proclamation (1623)
Thanksgiving, of all the days of the year, is the day when we should cultivate our 'attitude of gratitude', and here are some great quotes to make it a pleasure rather than a chore!
It's a day of food, fun, family... and celebration! But don't neglect the gratitude and thankfulness  to God, your family and friends, and the society you live in. Count your blessings and rediscover the true meaning and beauty of Thanksgiving Day with these inspirational, meaningful and thought-provoking quotes, sayings and poems... plus a few funny and irreverent Thanksgiving quotes for good measure.

Jump down to Humorous, Funny & Irreverent Thanksgiving Thank You Quotes

Both Houses of Congress have... requested me "to recommend to the people of the United States a DAY OF PUBLICK THANKSGIVING and PRAYER, to be observed by acknowledging with grateful hearts the many and signal favors of Almighty God."
George Washington (1731-1799), 1st President of the United States. Excerpt from The First Presidential Thanksgiving Day Proclamation (1789)


The Pilgrims made seven times more graves than huts. No Americans have been more impoverished than these who, nevertheless, set aside a day of thanksgiving.
Attributed to H.U. Westermayer


When our perils are past, shall our gratitude sleep?
George Canning (1770-1827), British statesman & Prime Minister


A thankful heart is not only the greatest virtue, but the parent of all other virtues.
Cicero (106-43 BC), Roman philosopher, statesman & orator


Gratitude unlocks the fullness of life. It turns what we have into enough, and more. It turns denial into acceptance, chaos to order, confusion to clarity. It can turn a meal into a feast, a house into a home, a stranger into a friend. Gratitude makes sense of our past, brings peace for today, and creates a vision for tomorrow.
Melody Beattie (b. 1948), American self-help author


Remember God's bounty in the year. String the pearls of His favor. Hide the dark parts, except so far as they are breaking out in light! Give this one day to thanks, to joy, to gratitude!
Henry Ward Beecher (1813-1887), American priest & social reformer


So once in every year we throng
Upon a day apart,
To praise the Lord with feast and song
In thankfulness of heart.
Arthur Guiterman (1871-1943), American writer, poet & humorist


Dear Lord; we beg but one boon more: Peace in the hearts of all men living, peace in the whole world this Thanksgiving.
Joseph Auslander (1897-1965), American poet, novelist & translator


Thanksgiving Day is a jewel, to set in the hearts of honest men; but be careful that you do not take the day, and leave out the gratitude.
E.P. Powell (1833-1915), American author, journalist & priest


Thanksgiving was never meant to be shut up in a single day.
Attributed to Robert Caspar Lintner, American priest


Thanksgiving-day, I fear,
If one the solemn truth must touch,
Is celebrated, not so much
To thank the Lord for blessings o'er,
As for the sake of getting more!
Will Carleton (1845-1912), American poet


Great as the preparations were for the dinner, everything was so contrived that not a soul in the house should be kept from the morning service of Thanksgiving in the church.
Harriet Beecher Stowe (1811-1896), American author & abolitionist. From: Oldtown Folks


Thou hast given so much to me,
Give one thing more,  a grateful heart;
Not thankful when it pleaseth me,
As if Thy blessings had spare days,
But such a heart whose pulse may be Thy praise.
George Herbert (1593-1633), Welsh poet & priest


Thanksgiving is nothing if not a glad and reverent lifting of the heart to God in honor and praise for His goodness.
Attributed to Robert Caspar Lintner, American priest


Thanksgiving Day comes, by statute, once a year; to the honest man it comes as frequently as the heart of gratitude will allow.
Edward Sanford Martin (1856-1939), American writer, journalist & humorist


There is nothing that should hinder the praises of God's sons and daughters on Thanksgiving Day.
David James Burrell (1844-1925), American priest 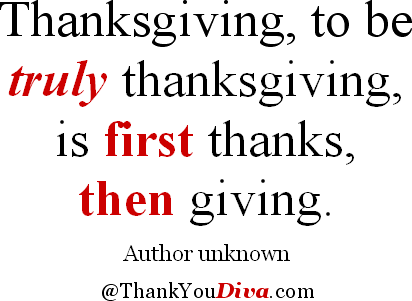 Nothing purchased can come close to the renewed sense of gratitude for having family and friends.
Courtland Milloy, American columnist for the Washington Post


I awoke this morning with devout thanksgiving for my friends, the old and new.
Ralph Waldo Emerson (1803-1882), American philosophical writer & poet


Thanksgiving is a time for families and friends to gather together and express gratitude for all that we have been given, the freedoms we enjoy, and the loved ones who enrich our lives. We recognize that all of these blessings, and life itself, come not from the hand of man but from Almighty God.
George W. Bush (b. 1946), 43rd President of the United States (from 2001 to 2009)


Gratitude consists of being more aware of what you have, than what you don't.
Author unknown


True thanksgiving means that we need to thank God for what He has done for us, and not to tell Him what we have done for Him.
Attributed to George R. Hendrick


As we pause to thank Him for the blessings of the past year, we must not forget to thank Him for the lessons we have learned through our difficult times. We are not to be thankful for just the pleasant, easy things, but ALL things.
Millie Stamm, American Christian author & public speaker


Thanksgiving, after all, is a word of action.
Attributed to W.J. Cameron


Not what we say about our blessings, but how we use them, is the true measure of our thanksgiving.
W.T. Purkiser (1910-1992), American preacher, scholar & author


Gratitude is the inward feeling of kindness received. Thankfulness is the natural impulse to express that feeling. Thanksgiving is the following of that impulse.
Henry Van Dyke (1852-1933), American author, priest & educator


To educate yourself for the feeling of gratitude means to take nothing for granted, but to always seek out and value the kind that will stand behind the action. Nothing that is done for you is a matter of course. Everything originates in a will for the good, which is directed at you. Train yourself never to put off the word or action for the expression of gratitude.
Albert Schweitzer (1875-1965), German/French doctor, theologian, philosopher & Nobel Peace Prize laureate


Thanksgiving, like contentment, is a learned attribute. The person who hasn't learned to be content will not be thankful for he lives with the delusion he deserves more or something better.
Attributed to Robert Flatt


The unthankful heart... discovers no mercies; but let the thankful heart sweep through the day and, as the magnet finds the iron, so it will find, in every hour, some heavenly blessings!
Henry Ward Beecher (1813-1887), American priest & social reformer


We often take for granted the very things that most deserve our gratitude.
Cynthia Ozick (b. 1928), American writer


To hear someone say 'Happy Turkey Day' makes me sad because they have nothing to be thankful for and no one to whom to be thankful.
Attributed to Robert Flatt


Best of all is it to preserve everything in a pure, still heart, and let there be for every pulse a thanksgiving, and for every breath a song.
Conrad Gessner (1516-1565), Swiss naturalist & bibliographer


Gratitude is born in hearts that take time to count up past mercies.
Charles E. Jefferson (1860-1937), American preacher


If I have enjoyed the hospitality of the Host of this universe, Who daily spreads a table in my sight, surely I cannot do less than acknowledge my dependence.
G.A. Johnston Ross (1865-1937), American priest


Heap high the board with plenteous cheer and gather to the feast, And toast the sturdy Pilgrim band whose courage never ceased.
Alice Williams Brotherton (1848-1930), American poet & writer


We have been the recipients of the choicest bounties of Heaven; we have been preserved these many years in peace and prosperity; we have grown in numbers, wealth, and power as no other nation has ever grown.
Abraham Lincoln (1809-1865), 16th President of the United States (from 1861 to 1865)


How wonderful it would be if we could help our children and grandchildren to learn thanksgiving at an early age. Thanksgiving opens the doors. It changes a child's personality. A child is resentful, negative  or thankful. Thankful children want to give, they radiate happiness, they draw people.
Sir John Templeton (1912-2008), Investor & Philanthropist


The funny thing about Thanksgiving, or any huge meal, is that you spend 12 hours shopping for it and then chopping and cooking and braising and blanching. Then it takes 20 minutes to eat it and everybody sort of sits around in a food coma, and then it takes four hours to clean it up.
Ted Allen (b. 1965), American cookbook author & TV personality


Thanksgiving: that's the day people celebrate food by eating as much of it as possible. Yes! That's the day they try to eat every turkey, pumpkin, and cranberry on the face of the earth. It's a tradition. And you know how I LOVE tradition!
Jim Davis (b. 1945), American cartoonist & creator of Garfield. From: Garfield's Thanksgiving


An optimist is a person who starts a new diet on Thanksgiving Day.
Irv Kupcinet (1912-2003), American journalist


May your stuffing be tasty
May your turkey be plump,
May your potatoes and gravy
Have nary a lump.
May your yams be delicious
May your pies take the prize,
And may your Thanksgiving dinner
Stay off your thighs!
Author unknown


TURKEY n.: A large bird whose flesh, when eaten on certain religious anniversaries, has the peculiar property of attesting piety and gratitude.
Ambrose Bierce (1842-~1913), American journalist & author of The Devil's Dictionary


There is no sincerer love than the love of food.
George Bernard Shaw (1856-1950), Irish playwright & journalist


Thanksgiving. It's like we didn't even try to come up with a tradition. The tradition is, we overeat. 'Hey, how about at Thanksgiving we just eat a lot?' 'But we do that every day!' 'Oh. What if we eat a lot with people that annoy the hell out of us?'
Jim Gaffigan (b. 1966), American comedian & actor


Make your Thanksgiving one long meal, because the more you eat, the more grateful you are gonna feel.
Jim Davis (b. 1945), American cartoonist & creator of Garfield. From: Garfield's Thanksgiving


My mother is such a lousy cook that Thanksgiving at her house is a time of sorrow.
Rita Rudner (b. 1953), American comedian & actress


Thanksgiving, when the Indians said, "Well, this has been fun, but we know you have a long voyage back to England".
Jay Leno (b. 1950), American comedian & TV personality


I celebrated Thanksgiving in an old-fashioned way. I invited everyone in my neighborhood to my house, we had an enormous feast, and then I killed them and took their land.
Jon Stewart (b. 1962), American comedian & TV personality


I have strong doubts that the first Thanksgiving even remotely resembled the 'history' I was told in second grade. But considering that (when it comes to holidays) mainstream America's traditions tend to be over-eating, shopping, or getting drunk, I suppose it's a miracle that the concept of giving thanks even surfaces at all.
Ellen Orleans, American writer


Thanksgiving is so called because we are all so thankful that it only comes once a year.
P.J. O'Rourke (b. 1947), American writer, journalist & satirist


Thanksgiving is a magical time of year when families across the country join together to raise America's obesity statistics. Personally, I love Thanksgiving traditions: watching football, making pumpkin pie, and saying the magic phrase that sends your aunt storming out of the dining room to sit in her car.
Stephen Colbert (b. 1964), American comedian & TV personality


Thanksgiving is an emotional holiday. People travel thousands of miles to be with people they only see once a year. And then discover once a year is way too often.
Johnny Carson (1925-2005), American comedian & TV personality


Thanksgiving is possible only for those who take time to remember; no one can give thanks who has a short memory.
Author unknown